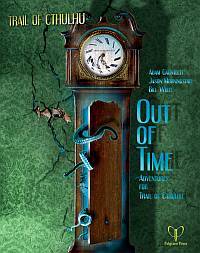 Soldiers of Pen and Ink

Description: The protagonists, sponsored by the Paris-based political organisation BNVS, have come to Spain to shoot a documentary on the war, and find themselves marooned in Madrid. One of their team goes missing, and their literary colleagues say its pointless  even dangerous  to ask what happened to him. In a war of competing ideologies, unorthodoxy can merit the death penalty, but is this Communist oppression or something more sinister?

Mythos Expeditions  An Incident at the Border

Description: On August 13 of 193-, during the Perseid meteor shower, something struck the Earth somewhere in the remote reaches of the Gran Chaco, a disputed and inhospitable borderland between Bolivia and Paraguay. Now, its late September, and the University has asked the Investigators to assist with a scratch expedition to find the impact site, make a full report of the incident, and recover any extraterrestrial material there, if any.

Description: Tuesday July 17th 1934. Present Franklin D. Roosevelt, on a 12,000 mile voyage from the Caribbean to Portland, Oregon, arrives at Clipperton Island. Four years later, in the summer of 1938, the President is organising a return to the island as part of a 6,000-mile cruise examining various islands known for their curious wildlife, including the Galapagos. As the short-list of candidates is prepared, the Miskatonic decides to organise an expedition of its own to Clipperton Island. With the journey taking a week from the southern tip of Baja California, they will have a week on the island before they have to head back to civilisation before they make their report. Upon an island with a dark past, of which humanity knows so very little, a week can seem a very long time indeed

Mythos Expeditions  Lost on a Sea of Dreams

Description: The group, en route to Bermuda with a bathyscout to assist naturalist and oceanographer William Beebe, is blown off course. The captain is injured in the storm, and few others aboard know much about navigation. Moreover what little they do know seems contradicted by the stars; none of the constellations are in the right place. How will the expedition get back on course?