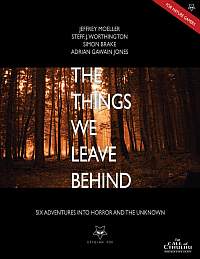 The Things We Leave Behind

While we have no firm release dates at present, but we're hoping the first book will appear at your FLGS, Chaosium's site, and our own site before the end of Q3 2013.

'The Things We Leave Behind' is our first book and will be a collection of modern day scenarios veering in a darkly disturbing direction.

We want to bring Cthulhu adventures, specifically modern ones, to a more mature audience and back to it's horror roots. We will aim to shock and horrify your players and much of our material will be geared at mature gamers. They will deal will with difficult and horrific subjects such as abductions, murder, and the stark knowledge that mankind itself can be more cold and calculating than anything from time & space.

Ahora sale The Things We Leave Behind