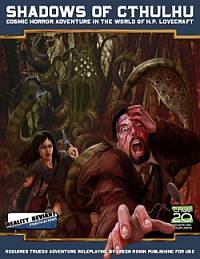 Terrible things lurk at the edges of civilization in the age of Shakespeare and the rise of English Puritanism. While this book contains some new options and suggestions for hero creation, it is primarily a guidebook for understanding the role of the Cthulhu Mythos during this period. Did the Master of Revels close the playhouses because Kit Marlowe\'s final play drove people mad? Is it really the Catholics that conspire to take over the crown, or are there more sinister forces involved? And what of the terrible rumours about the freak storms that drove the Spanish Armada into the sea? What really happened to the failed English colonies in the New World?

The origins of much of mankind\'s knowledge of the Cthulhu Mythos lies at the beginning of history, in the river valleys of Mesopotamia. This is a period when dreams mean something and demons openly walk the Earth. But this is also an age when many of the secrets known to man since the dawn of time are suppressed or transformed into man-made religions. It is the beginning of modern sanity. The people of this period still understand the power of the gods over them, but they have established a civilization and feel the first flush of power over nature and their oppressive deities. And they have Gilgamesh. This heroic figure, known as Sha nagba imuru, or the "one who saw all," was proof that a man with enough knowledge could transcend the power of the gods.

When the stars are right, the earth will fall, but not without a fight! In an age when ancient secrets are no longer secret and gigantic elder beings have destroyed entire cities and killed millions on the evening news, mankind struggles to survive and stay sane. Civilization has completely collapsed in some parts of the world, and many major cities are deserted nuclear wastelands, testaments to how far leaders will go to stop the madness. But order still hangs by a thread in green zones patrolled by paranoid police forces. Special troops are equipped to identify and engage the unthinkable, then forget everything they did and saw. Scientists and scholars study the artifacts of the enemy in secret research facilities, always under the watchful eye of soldiers looking for any sign that they\'re "crossing over." Only the very brave or truly insane travel the world at large.