A Lovecraftian tale of frontiers and madness.

I first discovered H. P. Lovecraft through Alien. My favorite part of that film is the beginning, when they find that ship and dont know where it came from. I loved the sense of mystery in the opening.

I started to read the short story Dagon, which would become the main influence on An Eldritch Place. I always wanted to adapt that novel into something and actually, when I was younger, I tried to make a series of comics, but I had to scrap that and never pursued that career. Anyway, after reading Dagon I became obsessed with Lovecraft and read everything of his. After that I noticed his strong influence on everything I had read from Stephen King and several other authors as well.

What I really liked about his stories is the sense of vertigo you get when reading because at some point it forces you to think about the cosmos. Its deep and sort of terrifying but not because of monsters but because we realize how insignificant we are in the whole universe 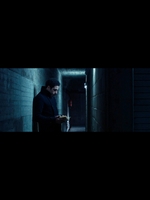