The Music of Erich Zann is a short film adaptation of H.P. Lovecrafts 1922 short story. It follows a Writer as he tries to recall the events that happened during the last night he stayed at the mysterious Threshold Hotel. He remembers walking into the building for the first time as a young man and instantly feeling a surreal atmosphere. Not long after, he met the mysterious receptionist, as well as the only other guest who stayed at the hotel at the same time as him; the old, mute musician Erich Zann. After their brief encounters, the Writer begins to hear the music of the old mans violin and becomes fascinated by its sound. As we delve deeper into his memories, the Writers reality begins to warp, becoming more and more obsessed by the music until one sudden evening, the mysterious nature of the hotel, music, and Zann himself are revealed.

We chose to adapt this story over some of Lovecrafts other stories because of its focus on atmosphere rather than traditional monster horror. Instead of being focused on a large eldritch being, the tale instead takes a much subtler approach to its horror by taking time to build the hotel, which a majority of the story takes place in. The hotel itself is a dark and mysterious location that hides a lot of secrets in its walls, as well as with the people who stay there. The choice of language used in the story also makes it such an interesting piece to bring to the screen. The lack of detail used to describe certain events leave each reader with their own interpretation of what happened, and this has lead us, the crew, to bring our opinions together to construct a version of the story that is more visual than other adaptations and tries to capture the surreal atmosphere of the Threshold Hotel.

We are all currently Film and Television Production student that are in our third year studying at University of Wales Trinity Saint David (UWTSD) in Swansea, Wales. For the the majority of the crew, this is the first project we have worked on together and we all approached this process coming from very different backgrounds. However, in such a short amount of time, we have gelled fantastically as a team and are currently producing work that we can all say we are proud of.

► The Music of Erich Zann on Vimeo

The Music of Erich Zann 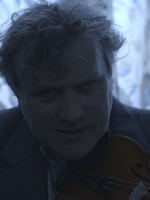