Adaptación de The Colour Out of Space (1927, Literatura) 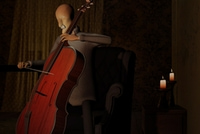 One night a strange event occurs. A meteorite strikes a farm in the middle of nowhere. Initially it seems that the meteor has not caused any major damage. However, soon the lives of the farming community begin to change - slowly and mercilessly. Gradually over time, an invisible force sucks all life from the farm and its people, spreading a strange colour and energy across the land.

"The Colour out of Space" is a story by American horror author HP Lovecraft. It portrays the feeling of helplessness and the resulting lethargy which leads to inevitable doom.

Berlin based comic artist and illustrator Andreas Hartung and "The Dunwich Orchestra" adapt this horror parable as a gloomy, episodic picture show. Using an atmospheric soundtrack, completely without words they draw the observer into a hypnotically decelerated maelstrom of horror. It's a dark drone comic picture show.

The adaptation takes the atmosphere and the horror of Lovecraft's story seriously and celebrates it  including its grotesque elements.

"The Colour out of Space" will be released in five parts, each between three and twelve minutes long and will be gradually published on the web.

The Colour Out Of Space - Chapter 3 Now online!

The Colour Out of Space ●●