We are delighted to announce the official release of Cthulhu Chronicles, a single-player narrative horror mobile game based on the Call of Cthulhu RPG.

Developed in partnership with MetaArcade, the Seattle-based developer of interactive fiction, Cthulhu Chronicles distills the essence of the award-winning Call of Cthulhu roleplaying system into a story-driven, intuitive experience designed for mobile gamers.

This narrative-driven, immersive campaign experience comprises multiple stories set in the 1920s New England. You play as one of several investigators, trying to untangle the mysteries involving crazy cults, sinister creatures, and horrors from beyond space.

We're commencing with an iOS version; an Android version is planned after release.

What is Cthulhu Chronicles?

Cthulhu Chronicles is an interactive fiction game for mobile devices, adapted from Chaosiums Call of Cthulhu tabletop RPG. So far, 9 adventures have been released, which tie together into a single 'Adventures in Lovecraft Country' campaign. A second campaign, 'Mythos Across America', is coming soon.

You have 6 characters to choose from when playing, and each has different attributes and backstories that affect how the game unfolds.

The story is set in 1920s Massachusetts within the Cthulhu Mythos created by H.P. Lovecraft. Players grapple with safety and sanity in a world of ever-encroaching horrors.

Cthulhu Chronicles is currently available on iOS, with an Android version in development. 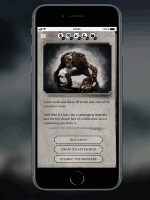