What is it about H.P. Lovecraft that keeps you making films based on his works?

It was accidental. In 1998 I was writing a short film called "L'Altrove", a war story, and I remember that I wasn't able to finish writing it; I had no more good ideas. So I started reading some books, and I read an H.P. Lovecraft collection called "Necronomicon" that was a truly great discovery. The discovery of a new world, the world of Lovecraft. After reading the collection I decided to put some of Lovecraft's elements in the short film, and after a few days the script was ready. Then a few years later the short was expanded into a feature film called "The Darkness Beyond". This was the beginning of true love. I love Lovecraft, although I'm much more interested in the man than in his stories. Someday I'd like to make a film telling his life story as it really was. 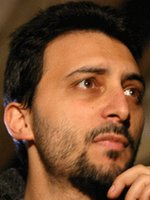