Lovecraft Illustrated Volume 4 - The Shadow out of Time 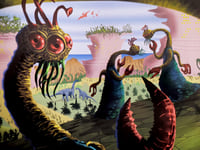 If you are reading The Shadow Out of Time for the first time I hope its one of those experiences youll never forget, as it was for me. The sheer scope of earths history, pre-history and the projections of a bleak future is staggering and, as usual with Lovecraft when he goes all cosmic, the human race is just a bit player in an epic pageant of life as it moves through the universe. Even our planet is only a stepping stone for the Great Race. And of course theres a monstrous undercurrent of ill wind and ill will stirring in hidden ruins where the mind-destroying truth is written and where it waits and waits for our hapless hero to stumble upon it!

The text used is the next-to-last corrected text edited by S. T. Joshi (his final version of all Lovecraft's texts may be found in H. P. LOVECRAFT COLLECTED FICTION: A VARIORUM EDITION, publish'd by Hippocampus Press). This small yet substantial volume is brilliantly illustrated by Pete Von Sholly, contains 13 (counting jacket) illustrations and/or photos by Sholly, a majority of them presented as two-page spread. The text of the tale has suffered in its early publications, including the Arkham House books; but the discovery of Lovecraft's original autograph manuscript, on the afternoon of January 17, 1995, has helped to restore the text so that it represents Lovecraft's authorial intentions.

Lovecraft Illustrated Volume 4 - The Shadow out of Time