Cthulhu City is a setting for Trail of Cthulhu, usable for a full campaign in its own right or as a nightmarish intrusion into an existing game. The Investigators find themselves in a strange, corrupted Arkham, a ghastly metropolis. People  humans  live in the city, and seem bizarrely normal on first encounter  their concerns are the same mundane, day-to-day passions and trials of anyone in the modern world  but scratch the surface, and the Mythos spills forth. Motorcars drive down streets lined with sullen-eyed basalt cyclopean buildings raised by no human hand; at night, loathsome and titanic shapes move behind the clouds. Its a city where priests masked with yellow silk proclaim the majesty of God from the churches; a city occupied by alien powers. The old-money families have names like Marsh and Whately and Curwen, and the worst crime imaginable is defying the will of the living gods.

Humans shouldnt survive here, but they do, blindly adapting to the horror all around them. Are the Investigators dreaming? Insane? Have they travelled in time? Is this an alternate reality? An illusion? Or have they somehow had their minds swapped with denizens of the city?

Or has it always been this way, and they can no longer deny the truth? 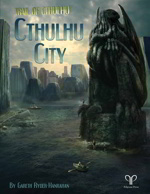