The Tiger Lillies and Alex Hackes - Mountains Of Madness (DVD)

Alexander Hacke, bass-player for the German band Einstürzende Neubauten, and London-based band The Tiger Lillies, broadly admired for their choices of unusual material and their eclectic musical repertoire, joined forces for the first time to pay a very special tribute to H.P. Lovecrafts genius and mastery. This musical performance is based on some of Lovecrafts most well-known and eerie stories, such as "The Rats In the Walls", "At the Mountains of Madness," and the Cthulhu Mythos cycle. Martyn Jaques penetrating falsetto, the musical saw, the piano and the stand-up bass are surrounded and accompanied by Alexander Hackes electronic soundscapes: the first time ever The Tiger Lillies have been accompanied by electronic instruments in any collaborative effort. In this show, stories of ancient gods, inexplicable terror and lost souls are lastingly brought to life in a sometimes humorous, yet pervadingly gloomy and melancholic manner. The eccentric confrontation of The Tiger Lillies' somewhat traditional array of instruments with Alexander Hackes sound compositions gives this performance its ghostly three-dimensional depth in which an open-minded audience can immerse themselves with the glee of enjoyment.

The productions special stage design is the work of artist Danielle de Picciotto. Lutz John, known for his impressive work for bands such as Einstürzenden Neubauten and Wir sind Helden, transformed the stage his lighting effects.

The Tiger Lillies and Alex Hackes - Mountains Of Madness (DVD) 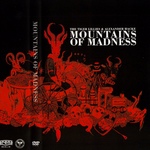