At its core this release is inspired by a particular historical detail, Governor Blighs enormous military muster of 1807. In the early days of the Australian colonies military resources were pretty dire  there were never enough troops to keep the peace for such a huge population of convicts, and the NSW Corps were given the crappiest of equipment and ordnance (and yet somehow expected to be the front line of defence if other European nations, such as France, decided to invade the colony). Every Governor had complained about this dangerous situation, but it took the irascibility of Bligh to ramp it up a notch. In order to prove to the Colonial Office back in London exactly how terrible the military situation in NSW truly was, he commissioned a team to travel throughout the colony and tabulate a full muster of all troops and ordnance, documenting all the stuff that didnt work. In the end this grand plan of Blighs led to nothing  but it provides an excellent concept for a Convicts & Cthulhu campaign. 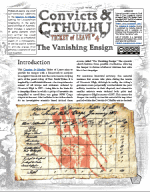