At the beginning of the 20th century in the remote forests of northernmost Michigan; copper miners toiled in the bones of the Earth by the shores of Lake Superior. It was difficult, dirty and dangerous work. Players in this scenario will find themselves working the Hecate mine in Red Plank, Michigan in 1904. What they encounter a half-mile below the surface may not only threaten them, but also their family, friends and their entire community. 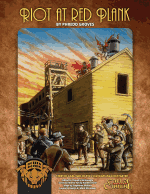