In this volume are five stories that really belong in the Lovecraft canon, even though they have been presented previously as revisions. From Lovecrafts letters we know that he wrote these stories from ridiculously scrappy notes and/or some very poor prose and that he wrote (or re-wrote) them fresh from beginning to end himself. Many of HPLs mythos creations appear in these tales and there is much to enjoy for fans who think they have read everything by HPL and are looking for more. Oddly, at least one revision has been presented by Arkham House as a Lovecraft story (Under the Pyramids) and many have not. We have already addressed 'The Mound' in a previous book and these others fit comfortably along side that gem as more real Lovecraft fiction. 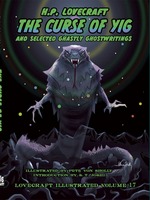