Impossible Landscapes. A Pursuit of the Terrors of Carcosa and the King in Yellow

Fear Is a Fractal

...and your world is a lie. A horror freed from an antique book reverberates through reality, shaking things, reordering them and making them run like wax. Doors open to endless Victorian hallways where threats stalk the shadows on clockwork limbs, cold metal seeking the warmth of blood and bone. Madness pursues at every turn, baring its teeth to speak your name, and you cant escape because its inside you.

But dont despair. There is hope. A King waits for us. Beyond the tumbledown façade of the world, through the twists and tunnels of the human imagination, past the edge of everything sane, the King waits in the country of Carcosa. The place all madmen go. There, and only there, is the answer to everything.

IMPOSSIBLE LANDSCAPES is the first campaign for DELTA GREEN: THE ROLE-PLAYING GAME. Four operations sprawl across decades and the immeasurable stretches of nightmare. Harrowing investigations and the bitterest truths test the mettle of the most accomplished Agents.

This digital download includes a 57-page bonus PDF with all handouts from the campaign and every handout as a high-resolution file that you can share in your own game.

Born of the U.S. governments 1928 raid on the degenerate coastal town of Innsmouth, Massachusetts, the covert agency known as Delta Green opposes the forces of darkness with honor but without glory. Delta Green agents fight to save humanity from unnatural horrorsoften at a shattering personal cost.


Call of Cthulhu (and regular Delta Green) is True Detective Season 1 from the perspective of the character Marty (Woody Harrelson).

There is a mystery to solve. There is an evil cult to stop. You have to follow the clues/evidence, and deal with those responsible.

Impossible Landscapes is True Detective Season 1 from the perspective of the character Rust (Matthew McConaughey).

There is a mystery to solve. There is an evil cult to stop. You have to follow the clues/evidence, and deal with those responsible.

You're not sure what you are seeing is real. Strange synchronicities in a flock of birds or handwriting in a journal. Dates and places oddly match up in the present with those in the past, as if your personal involvement in this investigation was somehow planned...or ordained.

Impossible Landscapes. A Pursuit of the Terrors of Carcosa and the King in Yellow 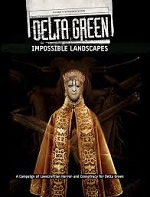