Welcome to the City of Spies

Istanbul in 1942 is a neutral city, packed with spies. Everyone's here - the Nazis, the Soviets, the Brits and the Yanks, the Japanese and a host of other nations, all waging a deadly war of wits against a backdrop of cocktail bars and polite smiles. From the infamous Snake Pit in the Park Hotel, to the jazz clubs and fashionable restaurants of Istiklal Avenue, to the warrens of alleys around the spires and mosques of Fatih and Sultanahmet, it's a city in ferment. While Turkey desperately tries to stay out of the war, the Führer's armies mass less than a hundred miles away.

But that's not all. Something even more terrifying is going on beneath the ancient streets of the Sublime Porte. Meddling forces have unearthed an ancient treasure, setting in motion plans centuries old which threaten to change the course of the whole war - and even the world!

Code of Honour: Zero Point 1942 is a multi-session Achtung Cthulhu adventure with a difference. It features:

- descriptions and personalities of Istanbul in 1942

- a detailed map of wartime Istanbul

- rules for tradecraft and spying

- secrets and mysteries of Istanbul, including new grimoires

- a multi-session adventure of lethal conspiracy

Can you fathom the mystery of Code of Honour, and win this deadly battle in the secret war? 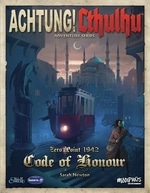