Something terrifyingly evil awaits among the ruins of the old Kirkwood farmhouse. It'll take a cunning team of investigators to uncover the truth behind the gruesome murders that took place there in 1924.

The Kirkwood Farmhouse Massacre is a modern-day Call of Cthulhu scenario for 2-5 investigators. Its pages contain a mind-bending haunted house adventure set in America's rural heartland. The scenario works both as a standalone adventure or as an addition to an ongoing Call of Cthulhu campaign. 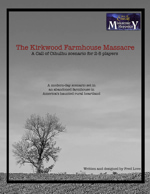