Journal dIndochine is a set of scenarios and campaign resources for the Call of Cthulhu 7th Edition roleplaying game set in French colonial Vietnam (~1925 to 1955).

The first half of the 20th century was a time of chaos and political ferment in French Indochina. As foreign imperialists struggled to maintain their precarious grip on the region, the people of the land worked to overthrow their tormentors. Radical religious movements like the Cao Dai sprung up to spread the blessings of a strange and unfathomable God. Hòa Hảo Buddhist militias supported the prophecy of the return of a king. Binh Xuyen gangsters schemed to gain territory for their criminal enterprises. All the while student revolutionaries preached new, secular philosophies that promised utopia for the downtrodden workers.

While the world seethed with conflict and change, hidden entities from far off in time and space have taken root in the jungles, gained footholds on the beaches and found supplicants in the cities of Indochine. Some of these entities offer the temptation of enlightenment and power to those who could unlock their eldritch secrets. While some of these entities simply desire some hors d'oeuvre after a long hibernation.

This is Volume 1 of the Journal dIndochine project, funded with the support of our Kickstarter Backers. 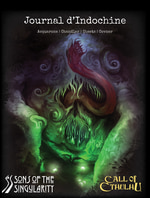