HOPE BY BOB BRINKMAN. Set in 1924 Arkham, MA this adventure is meant as a one shot departure from the normal Call of Cthulhu game, for this time, the players are the cultists.

THE RETURN OF THE HEADLESS HORSEMAN BY DAVID M. FETTER. It is the year of 1914 in early October. There have been two murders recently in the growing area of Sleepy Hollow, a glen of Tarry Town, New York. These murders are big news in the media because rumors tell about how the heads of the victims have been severed. Residents of Sleepy Hollow and surrounding areas are quickly correlating these recent events with the Legend of Sleepy Hollow, a tale that took place around a similar time of the year in 1790, over a century ago.

HALLOWEEN AT ST. ODILIO'S BY JASON WILLIAMS. The local church committee has decided to attract wealthy donors from Arkham and Boston by having the Abbey participate in the annual Arkham harvest festival. This festival traditionally carries on for a one week period at the end of October and ends on Halloween with events for the local children such as costume contests, bobbing for apples and storytelling sessions.

MASKS OF HALLOWEEN BY OSCAR RIOS. The town of Willowton is trying its hand at creating a new tradition for Halloween. Advertisements for The First Annual Willowton Halloween Festival have been placed in many area newspapers. Held at Old Man Johnsons Farm thre will be apple picking, hayrides, a cornrow maze and a Halloween parade ending in a costume party. Cash prizes are being offered for the best costume, as well as for anyone who can beat the cornrow maze. It seems like the perfect escape, especially since Halloween falls on a Sunday night this year (1926).

SHADOWS OF WAR PAST BY R.J. CHRISTENSEN. The investigators are part of a group that is camping in Tennessees Skymont Battlefield Park, a historic Civil War battle site on Halloween weekend. Where once an elegant and prosperous plantation once stood; forest, fields, and rehabilitated buildings now mark the site of what began as a simple skirmish that turned into a reputed massacre of soldiers and civilians alike. What the weekend visitors do not know is that the cause of the massacre may just spell a horrific end for them as well.

THE MASK OF NEIL MARLOW'S PET BY SIMON YEE. For Halloween, Neil Marlow bought a mask for his pug dog, Moochie, from a thrift bazaar held at St. Michaels Church. Unknown to Neil, and anyone at the bazaar, was the unique nature of the mask. 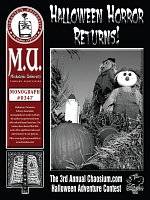