Kingdom of the Blind

1921: the Empire upon which the sun never sets. From east to west, Dominions and colonies, from far-flung Hong Kong to Jamaica, India to Canada, stretch to encompass a quarter of the worlds land and a quarter of its population. Upon every ocean a ship hoisting the Union Jack and armed with sixteen-inch guns, able to blow any other navy out of the water, slips through cold grey surf. An empires laws and language, economics, sports and culture have diffused across a malleable globe. Pax Britannica holds sway.

But the veneer is beginning to crack. A lost generation lies under the killing fields of Ypres and Passchendale, the survivors scarred, lost, and forgotten. Ireland burns with fury and fire as the war for independence rages. Up north, trade unions threaten to bring down the government, while communist sympathisers foment paranoia in Fleet Streets newspapers. From across the channel European fascism whispers sweet nothings to middle and working-class disillusioned. And beneath it all something dark twists; something immeasurably old and unfathomable. Its eldritch pulse beats through a society of Bright Young Things and dole-queue miners. This is the time of spiritualism, esoterica and occultism; of wild abandon and lost morals; of dark sects and darker arts. After the mechanical horrors of the War to End All Wars, man no longer fears the primordial nature of the universeand there are those who will use this to their gain.

Kingdom of the Blind is a guidebook for the United Kingdom between 1920 and 1930. While the majority of Lovecrafts stories take place in the rural seclusion of American New England, players with a more international bent may prefer to investigate the mysteries of the Old Country--beyond the horrors of Goatswood.

Kingdom of the Blind 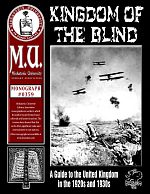