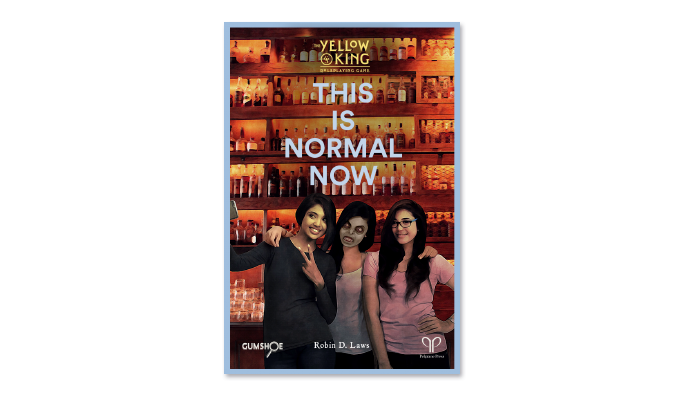 In This is Normal Now, the players portray ordinary people in a world that first appears to be our own. When they brush up against supernatural invaders from Carcosa, they discover a deep strangeness they knew about all along, but could not bring themselves to fully confront. Like most everyone else around them, they at the same time know and deny the existence of monstrous beings lurking in the shadows of their gaily lit twilight world.

In industrialized nations, attacks by predatory Carcosan creatures, often carried out in the open in view of onlookers, account for 15 deaths per 100,000 people every year. These deaths, euphemistically known as Safety-Related Incidents, or SRIs, are the second-highest cause of nondisease death in the US, UK, and Canada. Only suicides eclipse them. Death by SRIs are more common than from traffic collisions and murders. Although SRI rates remain surprisingly even from one country to the next, their highly variable other causes of death change the percentages considerably. For comparisons sake these pie charts show the impact of SRIs on non-disease death statistics.

These rates ought to exert a devastating toll on the popular imagination. SRIs exceed the human murder rate by a factor of 3 in the US, by a factor of 16.6 in the UK, and 9.6 in Canada. Yet not only do people not think about this that much, they find it very hard to think about it even when they try. People either cant think of the number at all, or can dimly recall it without attaching any emotional weight to it.

Even more frequent than slayings are incidents of property damage. Since the eruption of creature sightings Canada, the UK and Europe have nationalized their insurance companies in order to cope with a spike in claims that threatened to collapse the entire industry. The US heavily subsidizes them, a choice they label a market-based solution.

When the characters tune into the news, they still find it dominated by ordinary murders, accidents and structural collapses. Creature sightings go largely unmentioned or veiled in euphemism. A newsreader might tell you that four people were killed overnight in a safety-related incident on a particular well-traveled commuter route, without supplying further details. Only when the begins remain at large and on a rampage is a more detailed report issued. Even then it typically only advises people to remain in their homes until the safety threat has passed.

The ability to shield oneself from the horrifying implications of widespread supernatural activity is known as the Reintegration Complex.