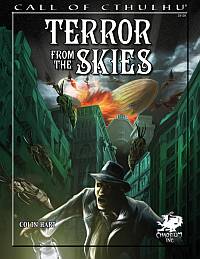 
THE LOVECRAFTIAN MYTHOS is populated by many creatures, both singular entities such as Cthulhu and Hastur, and creatures who number in the millions. The shan are an ancient, insect-like alien race fleeing a destroyed homeworld. Forced into a nomadic life they are scattered throughout space. Aeons ago a number of shan arrived on Earth, but certain properties in our suns light weakens them. Trapped, these first arrivals fell into idleness and decadence, acting only by seeping into the sleeping minds of human beings.

In TERROR FROM THE SKIES, bretheren of those first shan have come to Earth, vigorous and agressive, not yet weakened by our sunlight. Their insidious plan threatens the elimination of the human infestation and the founding of a new shan homeworld.