For the Romans it was the end of the growing season and a time of harvest. It was a busy time, when those working the land gathered in the fruits of their labor and made ready for the long dark months of winter. It was an important time because if the growing season was poor those there would be many hardships ahead.

For the natives here in Britannia, it was all that and much more. To them this was a sacred time, the start of their New Year. It was also when those who had died during the year made their way to whatever afterlife these people believed in. A time when they believed that all manner of ghoulies and ghosties, and long legged beasties were free to enter our world. 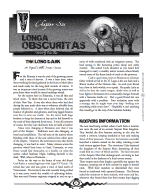