College Media Arts major Alan Breen decides to get some live footage for a "shaky-cam horror movie hes filming. He invites a group of college students out to an abandoned farmhouse hes rigged with cameras and shotgun mikes for a Halloween party. Aided by a crew of fellow students/actors who share his vision for guerilla filmmaking, he plans to put the partygoers through a series of staged, horrific events, and add the footage to scripted scenes. The resulting opus, Whos That Knocking?, will become a hit at the independent movie festivals. Fame and offers from established studios are sure to follow. 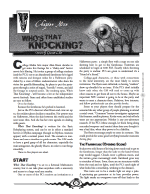