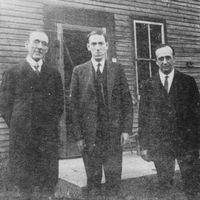 Printer, publisher, and amateur press editor residing in Athol, Mass.; he published under the pseudonym Willis Tete Crossman. Cook served as Official Editor (1918-19) and President of the NAPA (1919-20); he was also appointed Official Editor of the UAPA in 1907, but resigned before the end of his term. He edited and published several amateur magazines, including The Monadnock Monthly, The Vagrant, The Recluse,and The Ghost. He met HPL in 1917 through amateur journalism, Cook agreeing to print HPL's Conservative. His encouragement was instrumental in HPL's resumption of fiction writing in 1917. Cook wrote a brief article, "Howard P. Lovecraft's Fiction" (The Vagrant, November 1919) as a preface to "Dagon"-the first critical article on HPL's stories. He published many of HPL's early weird tales and poems in The Vagrant. In late 1925 he enlisted HPL to write "Supernatural Horror in Literature" for The Recluse (1927); in 1928 he printed HPL's story "The Shunned House" (rejected by Farnsworth Wright for WT) as a small book; his subsequent financial and nervous breakdown, brought on by the death of his wife in 1930, prevented the binding of the book. A small number of sheets of the 300-copy edition were bound by R.H. Barlow; the remainder were bound by Arkham House in 1959-61. In visiting Cook at his home in Athol in the summer of 1928, HPL absorbed many details of local history and lore reflected in his fiction, notably "The Dunwich Horror."