Last week Chaosium Inc held its first board meeting since Greg Stafford died in October 2018. Greg Stafford and Sandy Petersen returned to an active role at Chaosium ("The Return of the Great Old Ones") in early 2015, both serving on the company board.

Greg's passing meant the chair of the board position has been vacant, which Rick Meints as president has fulfilled in the interim.

At our board meeting, we welcomed Jeff Richard as the new chair of the board of directors. Greg's wife Suzanne Stafford and Greg's daughter Alisha Hammer were welcomed as new board members, and Suzanne as the new vice chair.

The Chaosium board of directors is comprised as follows: 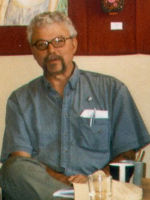