Tales of The Sleepless City

The minds behind such Classic Call of Cthulhu game titles as New Tales of the Miskatonic Valley and More Adventures in Arkham Country are proud to present Tales of the Sleepless City. This is a collection of 1920's era Call of Cthulhu scenarios that could only be set in New York. The Big Apple is practically a character in each of these pieces: investigate a strange explosion on the subway, disappearances in Hell's Kitchen, gruesome murders on the Lower East Side, and much more.

Tales of The Sleepless City 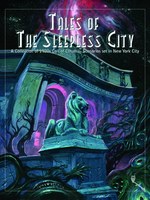