World War Cthulhu is a line of settings for the Call of Cthulhu roleplaying game. Each setting examines a different 20th century conflict and the ways in which the agents of the Cthulhu Mythos try to take advantage of the situation to further their own ends. The Darkest Hour is a core book in our World War Two setting.

In The Darkest Hour, players will take the role of people exposed to the secret horrors of the Cthulhu Mythos. Recruited into the network of N, a British Intelligence spymaster, wartime investigators come from a wide range of backgrounds in espionage, the military or civilian life. They are tasked with fighting a hidden war on two fronts: against the Fascist forces and the insidious Mythos menace.

World War Cthulhu: The Darkest Hour is a setting book for Call of Cthulhu, and the starting point for our game of espionage horror set during World War 2. It includes rules for creating investigators to join Network N, as well as new rules for various aspects of warfare including new weapons and equipment. Lavish background sections unveil the hidden conflict being waged amidst the various theatres of war, as well as a complete sandbox campaign, The God in the Woods.

You'll need a copy of the Call of Cthulhu rules to make full use of this setting.

In World War II, clandestine maps were printed onto cloth handkerchiefs to be used by Allied servicemen in case of capture behind enemy lines.

Games from the Front 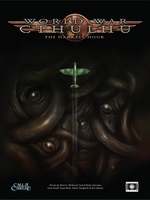