THE APOCALYPSE IS HERE

The men and women of Delta Green have pursued alien threats and supernatural horrors around the globe. They think theyre saving the world from horrific evil. But are they just saving it for something worse.

Delta Green: Targets of Opportunity is a conglomeration of evils, many of them whispered in hints and rumors since the earliest days of Delta Green.

BLACK COD ISLAND: An inhuman menace rises from the frigid waters of southern Alaska. Three hundred years ago the Haida Indians fought to stamp it out. They failed. Can Delta Green fare any better?

M-EPIC: A top-secret Canadian agency with a nationwide charter. Few of its members know its long history of using supernatural methods to battle the supernatural itself. Even fewer comprehend the terrible consequences that they face.

DISCIPLES OF THE WORM: Humanity has always quested for a means to defeat death. For some, its an all-consuming obsession. For Delta Green, a loathsome 25-year-old case still demands an answer to a crucial question: When immortality is at hand, exactly what price is too high?

THE DEMONTE CLAN: Hurricane Katrina was one of the most devastating storms ever to strike the United States. It ravaged New Orleans and left the proud city a flooded wreck. For its victims, Katrina was an unspeakable tragedy. For Delta Green, Katrina was a chance to strike at a long-festering horror. The target is an old and influential family whose people are something other than human, who see New Orleans plight as an opportunity of their own- and who have become quite skilled at destroying merely human enemies.

THE CULT OF TRANSCENDENCE: For centuries a cult of Nyarlathotep, the mind and soul of the Outer Gods, has conspired to change the world from behind the scenes, spreading its influence into the halls of power. Today its goals are more subtle and sinister than ever, guessed only vaguely even by its loyalest adherents. It may be the deadliest threat Delta Green has ever faced.

PLUS: A wealth of tools to add depth and horror to your Delta Green games: Combat Options, Stress Disorders, Background Options, DNA Analysis, and tips for running Delta Green. 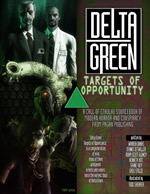