Age of Cthulhu I: Death in Luxor

In the age of the pharaohs, a great and unfathomable evil rose from the murky depths to cast its gibbous shadow over ancient Egypt. At the cost of his empire, Ramesses III imprisoned the horror beneath the sands of Luxor, where it has slumbered ever since.

In 1924, a team of visiting archeologists unearthed the last remaining testament of that ancient mystery, only to unleash a terror from out of time. Now death stalks the dusty streets of Luxor and a new age of horror is at hand. Can your investigators succeed where the mightiest of pharaohs have failed? Or will they fall victim to Luxor's secret past?

Age of Cthulhu I: Death in Luxor 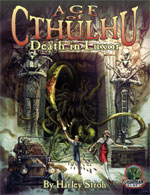