The Gods Hate Me

-Explore an ancient cache of antiquities brought to Rome from ancient Egypt;

-Build the demarcation wall ordered by Emperor Hadrian across the northern frontier of the Roman Empire;

-Learn the cause of the rebellion of Spartacus;

These are a sample of the winning entries for Chaosim's first Cthulhu Invictus adventure-writing contest.

The Gods Hate Me 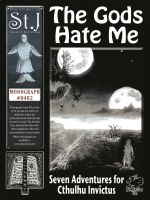