SECRETS OF KENYA introduces a portion of this vast and varied continent  three times the size of the United States, with a ratio of four Africans to every American alive during this era. Kenya provides a setting that can be both familiar and foreign. Settled by Great Britain in the 1900s it is an English-speaking colony where all the trappings of home can be found in the capital of Nairobi. Beyond Nairobis limits, much of Kenya remains unexplored and virgin territory for investigations, and hidden horrors.

The first half of this book provides a civil, cultural, political, geographical, and Mythos tour of Kenya during the 1920s and 1930s, the remainder offers four longer adventures using this background. The majority of the material in this book is factual, though locations have been elaborated on for game play. Familiar resources such as police files, newspapers, libraries, and museums are harder to come by. When they are present, diminished resources are all that investigators can expect.

Ooooops. No me había dado cuenta. 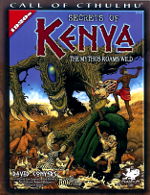