"Jovian Nightmares was conceived and written as a campaign setting for Cthulhu Rising  Call of Cthulhu Roleplaying in the 23rd Century.

The book is deliberately designed to be an open setting. What this means is that the background information is deliberately presented in an overview format rather than describing every minute detail of life in the Circum-Jove system. The reason I chose this approach is that I personally tend to dislike source books where everything is already filled in for you. It can often limit scope for individual GM creativity. Jovian Nightmares will hopefully provide enough of a framework for writing and running adventures in the Circum-Jove colonies, with enough freedom for Keepers to be as creative as they like.

Jovian Nightmares is also structured so that it can be easily translated into a non-mythos BRP resource if this is desired." 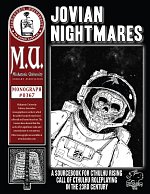