The Repairer of Reputations

The Repairer of Reputations is a Trail of Cthulhu scenario by Robin D Laws, based on the story of the same name by Robert W. Chambers. It is one of four short horror stories incorporating Chambers mythology of The King In Yellow, a decadent play whose publication brings madness and supernatural presences into the world. His mythology was later subsumed into the Cthulhu canon when H. P. Lovecraft, and his circle and later followers, made reference to it in their tales of the mythos.

This scenario allows the players to recreate an alternate version of the story, in which their characters, who do not appear in the original, confront the nation-shaking conspiracy of its central villains. They either destroy it, or are destroyed themselves.

A seemingly utopian future takes on a distinctly nightmarish quality. The scenario plays with this by suggesting that the publication of The King in Yellow has warped history in a disturbing direction. The alien beings described in the play are as real as the antagonists believe them to be. They want their literal heir of Hastur, Hildred Castaigne, to ascend to the Imperial throne of their AmericaHasturs America.

The Repairer of Reputations 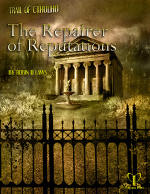 The Repairer of Reputations 44 Pelgrane Press