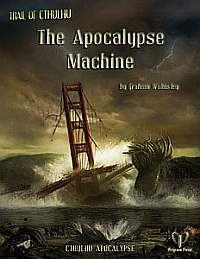 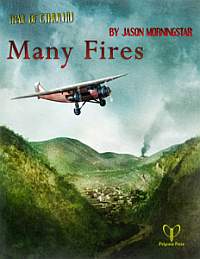 Me sumo a los agradecimientos.


The shadowy depths of the primeval forest are the ancient source of our collective fears. But there is worse in the woods than timber wolves and fairy tales; you can lose not just your way, but your mind, too. This brand new collection of Trail of Cthulhu adventures explores hidden groves and endless avenues  the hideous soul of Lovecrafts forest.

Midnight Sub Rosa. The diary of Ezekiel de la Poer, a colonial-era French necromancer hanged for child-murder in 1736 was stolen at the home of an emeritus professor in the small town of Rosa, Alabama. His house lives in the eaves of a forest of white ash. Can the Investigators find the book before its thief becomes something else entirely?

The Silence Mill In a small village in Brittany close on the Arthurian forest of Brocéliande, a friend of the Investigators stands accused of serial murder, cannibalism and even lycanthropy. Can they ascertain the truth, or will the truth find them?

Dreaming of a Better Tomorrow for 30 Dollars a Month Amongst crowded green precipices and muttering forest streams of Vermont, labourers from one of Roosevelts integrated Civilian Conservation Corps camps disappear. In an atmosphere fraught with political intrigue and Jim Crow laws, can a mixed bag of Investigators find the primordial peril which threatens more than just one camp, or even one State?

The Coldest Walk. Deep in Wisconsins northern woods lies the town of Four Pines  a quiet, almost forgettable community. However, whenever the aurora flashes in the sky the inhabitants have a terrible choice to make. Can the Investigators stop the inevitable, or must they take the Walk for themselves?

Trembling Giant In 1937, the United States government transferred 300 acres to the newly recognized Koosharem Band of Paiute Indians. But this new land is throttled by distorted trees and stalked by unnatural beasts. Nightmares grip the shaman and warning totems shatter  what is the legacy of this ancient land, and can the tribesfolk fight this ancient evil?